Tomorrow's the day! Saturday, June 12, at 10:30 a.m. Mountview Park, 1651 East Fort Union Blvd. Bring you family, friends, and your own picnic lunch. Deserts will be provided. Join us for a fun time and get re-aquainted! Hope to see you there.
Posted by Annette at 8:46 AM No comments:

Connections: Keeping our German from Russia Heritage Alive; July 13-15, 2021; check it out at ahsgr.org.
Posted by Annette at 2:34 PM No comments:

The Family History Library will be opening soon! Dee Hert is one of many official volunteers working there on Thursdays. Join her and the Germans from Russia research group to work on those brick walls. The library has purchased numerous Volga, Caucasus, and other area's publications. How fortunate we are to live close to one of the world's greatest treasures. If you would like assistance with your research, join Dee at the Family History Library.
Posted by Annette at 2:02 PM No comments:

Folklore for the AHSGR Convention

The Intermountain Chapter is preparing the Folklore segement for the upcoming convention. Handmade quilts made by Volga German families are needed for display at the event. If you have one of these treasures and are willing to share, please write up an article about the quilt's history and family connection. Include details such as who made the quilt and the family village if known. You can be present at the recording of the project if desired. Further information on date, location, and time will be coming. If you have questions, please contact Dee Hert.
Posted by Annette at 1:20 PM No comments:

When the library opens you will notice numerous changes; increased number of computers, table space, scanners, etc. The greatest change will be location of materials. 1st. Floor: Is more open. 2nd Floor Home to Canadian and US microfilms along with new and original scanners. 3rd Floor: Additional bookshelves, collection expanded by 40 thousand books. New scanners. B1: British Films: Maps relocated to new map cases. Additional desks, computers, and microfilm readers. B2: International books, no longer housed in high density. Guests may bring personal books in for scanning. Details coming soon. Library opening date remains uncertain. Consideration for safety is a huge factor; all staff must be fully vaccinated. Construction and re-signage must be completed. Websites and social media to be updated. In addition to this heavy staff workload the library continues to offer online classes and webinars. Continual appreciation to the library and staff for their efforts to provide improved service to the public. The services to the Germans from Russia culture are outstanding. Dee Hert
Posted by Annette at 6:10 PM No comments:

We as a group are very blessed and fortunate; we are also aware of others who have great needs.  Tabitha's Way 2021 is in need of donations for the population they serve.

It is proposed that our chapter support those in need.
Plan A:  We gather numerous items and present them to the Ansley's when/if we have our traditional Christmas Party at the Springville church.
Plan B: We gather extensive supplies.  I propose we load them into my truck and transport several loads before December.  I am willing to come to you if you have several boxes of donated items.
Downsizing- is it time to donate items you no longer need?
Retired-is it time to empty that closet of unused items?
Outgrown- do you and yours have a ton of clothing that no longer fits?
Children- diapers, food, children's clothing and books.
If you have an item you would like to donate but are unsure if it qualifies, contact Shirley Ansley.  For a complete list of items, contact Dee Hert.  Emails for both are in the in the right hand column of this blog under chapter officers.
Posted by Annette at 5:25 PM No comments:

The following two timelines are part of a presentation by Annette Adams, given at our latest Intermountain Chapter meeting.  You will find the information helpful if you are researching ancestors who came through Lincoln, Nebraska, on their journey in America.

to settle Russia. No response.

of Catherine the Great and Alexander I. The German colonists

were to lose their special status and privileges and become subject

to Russian military service after a ten-year grace period.

Nebraska and the Dakotas. Scouts from other Black Sea

colonies and the Volga Colonies investigate opportunities in

and the beginning of Soviet communist rule.

1862:   Lincoln, Nebraska was founded on the wild salt marshes of Lancaster County.

1886:  Chicago and Northwestern and Missouri Pacific

are Germans from Russia.

Posted by Annette at 6:57 PM No comments:

Today I started reflecting and realized that I miss my Intermountain Chapter family.  It's been such a crazy year, something out of the Twilight Zone or Jumanji.  Spending so much time at home has made me aware that I need all of you and what you've added to my life.  It has given me time to dig into my research and get to know my ancestors better.  I have become grateful for all of you for the information you've shared with me.

If I'm honest, I had only small and occasional successes until I joined AHSGR.  Without all the work of others, I'd still be stumbling around in the dark.  Having the resources available through the organization has helped me locate censuses and church records. I better understand the social history of my people.

In a more personal way, even very brief associations have enriched my life and research.  At the convention in Kansas, I met a man whose great-grandmother was a sister to my great-grandmother.  I'd known of the sister and had so many questions.  He filled in the story for me and went home for pictures that he gave to me for keeps.  I discovered a distant relative, related through both my German Russian heritage and my LDS pioneers.  What fun that was for me.  One chapter member, Sharon White, is related through several lines.  She freely shares information, allowing me to make breakthroughs. She and many others have contributed so much to other's research.

I could mention many chapter members who helped reorganize and bring back the Intermountain Chapter, but I'd surely miss someone.  Please, know how much you are appreciated. Thanks for all of your continuing hard work and effort.  I am anxious for the day that we can meet together in person and enjoy the fellowship face to face.

Before this all gets too sappy, I'll stop.  Just a bit of information first.  I've been using my time at home to take genealogy courses online through Salt Lake Community College.  It's opened up some new interests and filled a lot of skill gaps for me.  If you're looking for something extra, check into it.  Even better, if you are of retirement age and live in Utah, classes cost a whopping $10 for a semester.  Here's hoping that you stay healthy, happy, and productive.

Posted by Annette at 3:35 PM No comments:

The Genealogical Proof Standard is the process that genealogists follow to determine if they’ve done everything necessary for a credible work.  There are five essential steps to this process.

2. Each fact has an accurate source citation.

3. The evidence is reliable, correlated, and interpreted carefully.

4.  Any contradiction in evidence is resolved.

5. The conclusion is sound and written clearly.

This process helps the genealogist determine what they need to learn and how to approach problems in their research to come to a correct conclusion.

Posted by Annette at 8:43 PM No comments:

I want to share a methodology for reading a document. This is helpful when transcribing documents in a foreign language.  A step by step procedure like this helps even those who are familiar with transcribing records.

1.  Identify all the names in the document. This will be the easiest thing to do.  I like to look for proper nouns that are capitalized, and names often look much the same in different languages.

3.  Identify action verbs and relationship words such as married, born, and died.

4. Identify places.  This is the most difficult because of all the variation. Use gazetteers, online maps, and Wikipedia articles to help with this.

An article was published in the Die Wilt Post, 1938, about the village of Anton.

Refer to the AHSGR Journal, Vol. 6, No. 4, Winter 1983, for a more detailed
account of the village.
Anton was located along the Volga River.  One of the industries of the area
was a sugar beet factory.  In 1875, the sugarbeet factory closed and the
people had to resettle to other areas for work.  A group of Antoners went as
far away as Baku, in the Caucusus, to find work.
I have been the Village Coordinator for Anton for many years and also have
a passion for the movement to The Caucasus.  The Stark family resided
in Anton and are related to the Hert family.
I encourage fellow researchers to share any Caucasus information.  Thanks
for the support.
Dee Hert
VC:  Anton and other villages
Posted by Annette at 9:49 AM No comments: 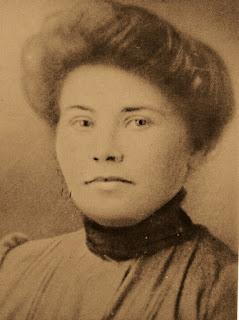 Yesterday I was on Facebook looking at the Volga German page.  One of the members had posted an interesting story about his grandfather, who was a victim of the 1918 Pandemic. As I looked at the comments I realized how many of us with that ancestry had similar experiences in our family history.  Some of the followers told about losing both grandparents.

This is a picture of my grandmother, Katharina Elisabeth Klamm Burghardt, born in Warenburg, Russia. The family was living in the Denver area at the time of her death in October of 1918. Her death was a result of the pandemic. It was during the second wave, between September and November of that year.  It proved to be highly fatal in the United States, with  195,000 deaths in October alone. My father was only two years old, and she left behind her husband and ten children.  As I've followed my family's story through the years, it is apparent how much that changed the world for them and their descendants.  That's just one family out of the millions of deaths.

The pandemic we are now experiencing has made me desire collecting the stories of my family.  I'd be happy to post any stories you'd like to share as well.  If you'd like to submit, please, send them to me.
Posted by Annette at 11:35 AM No comments:

How do I write an effective research query?
Genealogy is really just detective work. Clues lead to more information. When asking a research question, please include as much of the following information as possible:
Posted by Annette at 10:54 AM No comments:

Older Posts Home
Subscribe to: Posts (Atom)
If you find that you have made a connection with some of the people or places in the histories posted on this blog, you are invited to add your email address with your comment so that other genealogical information can be exchanged if it is available.
Located in Utah
Chapter Officers
President: Viki Strong
vikistrong73@gmail.com
Vice President: Ellie Vance
elliealiese@gmail.com
Vice President: Camille Andrus
camilleandrus2@gmail.com
Secretary: April Jones
apjones38@gmail.com
Treasurer: Evelyn Redfield
eredfield4@gmail.com
Membership and Chapter Advisor: Shari Stone
sharistone2007@gmail.com
Activities: Dee Hert
deehert@gmail.com
Newsletter Editors: Pat and Shirley Ansley
shirleyansley43@gmail.com

The American Historical Society of Germans From Russia is an international organization dedicated to the discovery, collection, preservation, and the dissemination of information related to the history, culture, and genealogy of Germanic settlers in the Russian Empire and their descendants.